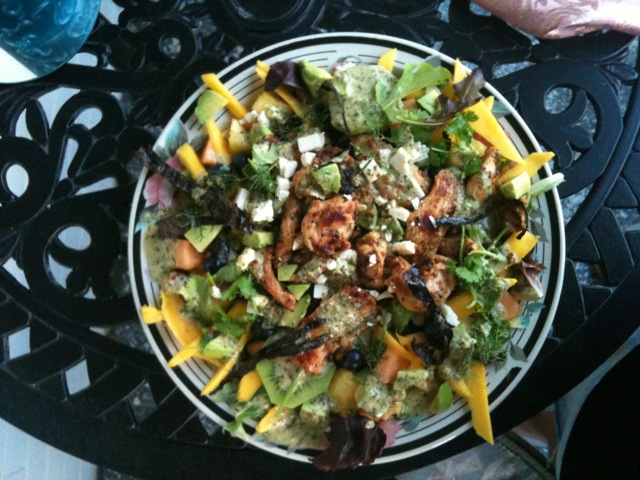 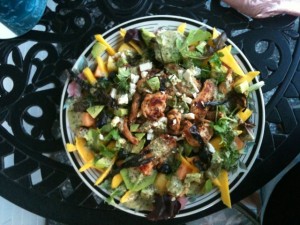 Well, it was about time to find out if the new cook in the fold could live up to the pressure of blogging. It becomes readily apparent that it will be a challenge to simply keep up with her as she pulls from the cupboard and begins to throw haphazardly into a bowl. To begin with, I have no idea what she is attempting to make, so bare with us. I am pretty confident it should be ok, and if I can convince her, maybe she’ll let me know what this blog is about before we are finished!
So, the first thing she does is slice two chicken breasts (breast or thigh are awesome for this recipe…well, to be honest they are just awesome…oh yeah and the chicken is good too ;-)). But seriously, slice the chicken into half inch strips and place into a bowl. In a separate bowl, she turns to the marinade, which includes:

She combines the above ingredients and pours it over the chicken (using either a ziplock freezer bag or non reactive container). I wish for luck and pray to the Jamaican god of song, Bob Marley as she places it in the fridge to marinade for about an hour.

As the chicken marinades, she turns to the healthy part of the meal. While typically I would skip this part, since it is her first blog I guess I will endure this requirement to bring fibre and nutrients to my diet.

Already flustered, I must step away to have a laugh as she slices the mango with the skin still on! As she pathetically defends herself, welding a knife in one hand, she explains her mistake by saying that she only planned to use half the mango. Oh… that explains it all, I say with a smile!
I then explain to her that her meal will be photographed and the real panic sets in. The mango is not cosmetically perfect, and given she knows the editor of this site will slap her down, she regresses to eating every non-perfect matchstick, and, surprise…the other half of the mango is called into service!
Ok, back to the salad. Next the following is prepared:
1/6 Pineapple (skinned, cored, cubed into small pieces)
¼ Cantaloupe (skinned, seeded, cubed into small pieces)
¼ c. Blueberries
½ Avocado (skinned, cored, cubed into small pieces)

So, while I am sitting here typing, she begins to reveal the essence behind the salad… she describes the dish as “a little bit sweet, a little bit hot” and she wants some tang. But, as a somewhat distracted cook that has some challenges in keeping a single train of thought she moves off the tang and adds the following:
4 Green onions (sliced)
3 Pickled jalapeño peppers

Oh, she wants a comment added here (because she has had too much wine)…you can substitute the peppers with a dash of wasabi paste.

(Note: I have provided links to the sauces that were used, while it is recognized these may not be available in your area, the links should give you an idea of what flavours are being captured and I will leave it to you to find suitable alternatives, if required)

So, we are back to the chicken. To remind you all, it has been marinating for about an hour. She pulls out a large skillet and heats the pan to a medium high heat. She proceeds to drizzle the olive oil into the pan and adds the chicken. She cooks the chicken over a medium high heat until chicken is no longer pink with a nice seared outer edge. Oh yes!…and because a meal is not one of her meals without the ability to strip furniture from the spiced heat, she proceed to sprinkle red pepper flakes over the chicken as it cooks.
Additional Ingredients for cooking the chicken include:
2 tbsp Olive Oil
1/8 tsp of red pepper flakes

With the chicken pulled from the heat, the creation begins. As she was slicing and dicing the salad fixings earlier, she plated the salad at the same time. With the salad nicely layered, she tops it with the dressing, layers on the chicken and finishes the plate with a sprinkle of blue cheese crumble. (1/8 c)

So the adventure ends! From a chaotic beginning to a finished master piece, the salad is in fact a medley of flavours, capturing the perfect amount of heat with the cooling effect of sweet fruit. As she lays the plate before me, I comment… “You’ve still not told me what it is called… Hmmmm, she ponders, perhaps I’ll call it the “Summer Salad Sensation”… Works for me! Enjoy!