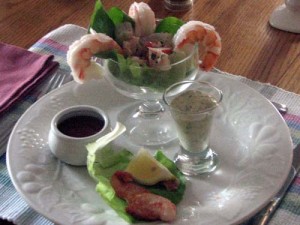 The head chef of our family and my wife, Heather Ann, had a birthday approaching and I had not even thought of making a special meal for her as we were out for dinner the night before and were not planning anything in particular for dinner the next day. However, as the evening before wore on, it became obvious to me that she had hoped for a special meal so she could consume her bottle of Pouilly-Fuisse that I had bought previously. This wine she had become addicted to during our Mediterranean Cruise for our 50th wedding anniversary. Well now I was in a quandary, obviously I needed to think of something that would go well with the wine, however it was now Sunday morning on the island and I had only a few options to obtain the ingredients.

Being a quick thinker I thought of a fish store that might be open Sunday so I ferried and drove to the store only to find it closed. Now desperate, I had a look in a nearby grocery giving up the idea of fresh fish in favour of whatever I could find at the grocery store that would work. I first noticed some nice looking New Zealand fresh lamb chops that would do for the dinner but was not quite what I wanted for the wine so I kept looking. Next I came upon a can of frozen previous cooked lobster meat that looked promising. Now thinking of a starter course I next found some large and gigantic frozen shrimp and my quandary was over. We would have a first course of lobster and shrimp cocktail. I next found some cocktail sauce and mint sauce and left with my catch in tow.

Back at the ranch I put my mind to preparing a special cocktail for Heather Ann. The first part was easy just peeling the shrimp and cooking them in boiling water salted and with a splash of lemon. After a few moments they were done and ready to drain and plunge into ice water to stop the cooking. That accomplished I next thawed the canned lobster and separated the pieces. Now since I had asked our close friends the MacDougalls to come and help us celebrate I chopped up enough lobster and shrimp into coarse pieces reserving 12 gigantic shrimp and three large claw pieces for decoration. We now pause a few hours while the pieces cool in the refrigerator and Heather and I take a hot tub.

Our guests arrive on time bearing gifts of flowers for Heather Ann, a fresh made Caesar salad with fixings as well as fresh corn on the cob. We accepted these gifts and even though I had prepared fresh smashed herbed potatoes we decided to have both saving the salad for a third course. So while we had drinks on the porch I prepared my masterpiece. First I needed some better cocktail sauce and having spied a recipe for Lobster Rolls that had a decent looking sauce I decided to attempt that and as I had two sauces I would serve both on the side to allow diners a choice. The recipe for the sauce follows:

This looked and tasted so much better than the store sauce so I decided to use it to lightly coat the chopped up shrimp and lobster before assembling my creation. To assemble I needed a cocktail glass, two small serving glasses and some bib lettuce. Lining the cocktail glass with the lettuce, I spooned the chopped up lobster and shrimp onto the lettuce, and decorated the rim of the glass with four gigantic shrimp. Now I still had a lobster claw to use as decoration. It was lost in the glass itself so I placed another small leaf of lettuce on the plate and placed the lobster claw onto it. I then filled the two containers with each of the sauces and behold the creation was complete.

The rest was simple I barbecued the meat to perfection having seasoned them with rosemary/garlic salt and pepper. Cooked the fresh corn and potatoes and the main meal was done. This was followed by the freshly made Caesar salad and dessert made from a cake left over from our weekend party with the children. I covered it with fresh raspberries from the garden and Voila; a birthday party accomplished.