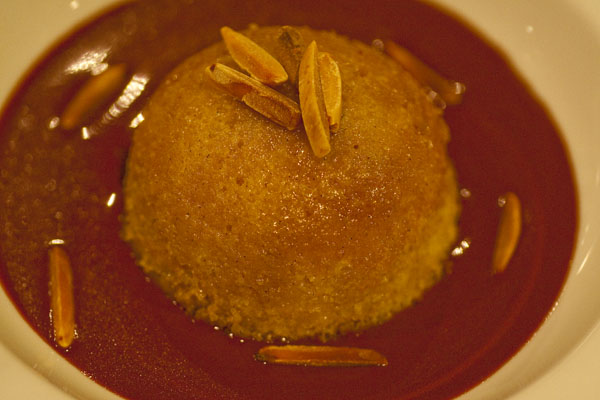 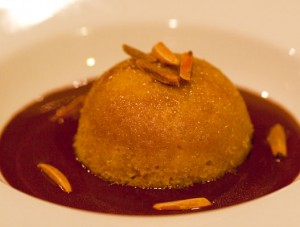 Ever since we spied this recipe on the cover La Cucina Italiana in April 2009 I have kept it on my ever growing list of things to make. A round cake in a bowl of chocolate; looked pretty good to me and anything that says bread pudding is going to get my attention. The original name of the recipe was Budinetti Di Mandorla Con Salsa Di Cioccolata. The recipe itself is not overly difficult to make but the ingredients are not going to be found in your regular pantry.

Almond flour was a new ingredient required in the recipe that is heavy and dense compared to regular flour. It appears to have helped provide a certain heaviness to the cake. The other ingredient was the maraschino liquor. We decided not to go out and buy that but simply mixed liquid from a maraschino cherry jar and some vodka. I think this actually could have used more viscosity so if we do it via that method in the future we will probably boil the mixture down a bit. Another item was the demerara sugar that was not on the pantry shelf. You can read more about it here but upon doing my research found we did have similar on the shelf in the way of Turbinado sugar. The last item that truly held me up from making this some time ago was the half-sphere cake molds. I finally found some here and was baking this recipe within a week of getting them. One other note on the recipe itself is the amount of bread. It is bread pudding so it may not matter that much but have you ever seen a one size fits all for a large challah loaf. Define large! It would be best when describing a recipe like this that you provide either a weight (preferred) or a cup measure. Further, one-quarter inch slices are thin and since you are going to mix it with water at any rate why so thin. A little thicker would be much easier for most people to cut without a special device.

The end product came out looking as advertised and the taste was good. We served them with the cakes at room temperature at first but then found that warming the cakes up a bit before putting them in the warm chocolate helped with the texture and flavors when eating them. The cakes were heavy with good notes of vanilla and almond flavor in every spoonful with chocolate wrapping up the package. The dessert presents very well as how many of you have been served a cake that looked like half of a globe. We would make this again for that reason but would not rate it as high for the flavor. We made ours with Challah bread so it may have a slightly different flavor with Brioche. Our pictures could have been better; was rushed on this one. 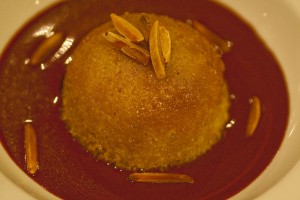 Preheat the oven to 350°. Grease cake pans with butter and sprinkle the bottom and sides with the Turbinado sugar until fully coated. Spread the almonds on a baking sheet and bake, stirring once, until lightly golden, about 3 minutes. Cool on wire rack.

In a small saucepan, combine the butter and vanilla stirring occasionally over a medium heat, until butter is melted. Scrape seeds from vanilla pod into butter and discard pod. Transfer vanilla butter to a large bowl.

Place the bread in a bowl, cover with milk and let sit for 10 minutes. Squeeze the bread to extract milk and transfer the bread only to the bowl with butter. Discard the milk. Add the all-purpose flour, almond flour, 5 tablespoons granulated sugar, egg yolks and egg and mix ingredients. In a separate bowl of an electric mixer, beat egg whites with remaining 2 tablespoons sugar until whites hold soft peaks. Fold into brioche mixture.

Transfer the yellowish batter to prepared pans. Set pans on a baking sheet and bake, rotating baking sheet once halfway through. Putting each of half-sphere in a muffin tray can help keep the mold from moving and tipping. Once the cakes are golden with darkened edges and cake tester inserted in center comes out clean remove them from the oven; about 20 minutes. Note that these cakes can be made ahead and kept at room temperature, wrapped in plastic wrap, for up to 2 days.

Four the sauce, in a medium saucepan, bring 1 cup water to a simmer. Add chocolate and maraschino liquor and whisk together until sauce is smooth. Remove saucepan from heat and let sauce cool to room temperature, then transfer to serving bowls, top with cakes (dome-side up), sprinkle with reserved almonds and serve. To serve we recommend reheating the cakes slightly using a microwave for about 15-20 each. You can do this before or after inserting into the chocolate.