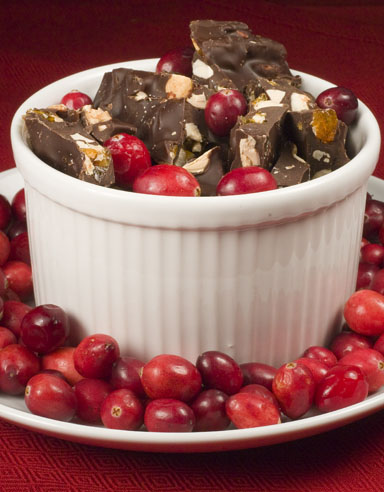 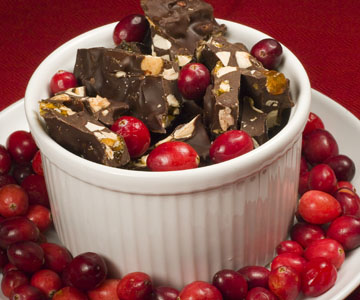 The holiday season brings out all sorts of candy bark varieties. Peppermint bark is often at the top of the list of favorites for many of us. What better way to use some candy canes. In a recent issue of Fine Cooking magazine they introduced a recipe for bittersweet chocolate bark with Marcona almonds. The picture looked delicious and I also wanted to find out what Marcona almonds were as I had never used them.

It turns out these almonds are native to Spain and are more round and plump than the traditional almonds grown here in the U.S. I must say that I found their texture and flavor more pleasing than the standard variety. In my research I saw one discussion thread where people said it was like having crack in their house since is was so addictive. While I can’t relate to the comment about crack, once a can is opened it is hard to stop eating them. I had to make sure I still had 9 ounces left. I was shocked to actually see these being sold at Costco so they must becoming more popular. 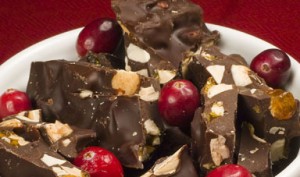 Having solved the mystery behind the almonds, it was time to try this new bark out for the holidays and see if it can make the grade. Any bark that includes a brittle takes a little more effort and patient as you monitor the candy thermometer and these were no different. Now some barks simply coat the brittle in chocolate and perhaps sprinkle nuts on top, this bark encases brittle that you break into pieces. The end product was a good blend of flavors and crunch. The brittle inside might be a little hard for some and we also did find the chocolate melted a little quicker in the hand than one might like.

The wrap on this cookie trial was positive, but it would not kick out one of our traditional barks. We would make it again with perhaps some modifications to the chocolate to improve its stability.

Prepare the brittle first by lining a heavy duty rimmed pan with foil. Put the sugar in a heavy medium saucepan and add 1/4 cup of water swirling the pan to coat the sugar. Cover and boil over high heat until it turns golden around the edges or about 4 minutes. Remove lid and continue for another 3 minutes swirling the pan. Stir in half of the nuts and quickly pour on the baking sheet spreading it out into a 1/4 inch layer. Cool completely.

Peel the brittle from the foil and coarsely chop. Sift through a medium sieve to remove extra fine pieces and dust. Line 2 8×8 pans in foil. Using a double boiler melt the chocolate being careful to avoid any water from entering the top pan(bowl). Once the chocolate is smooth and melted remove from heat and stir in the remaining almonds and brittle pieces.

Divide the chocolate between the two pans minimizing any exposure of the brittle. Shake the pans to level and settle the chocolate. Refrigerate for at least 30 minutes until firm. Turn out the barks and remove the foil. Cut or break the pieces into rough rustic edged pieces and refrigerate until ready to serve.