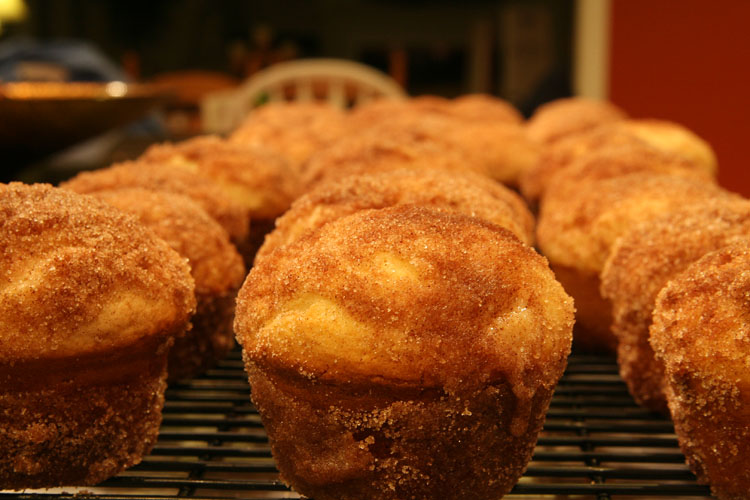 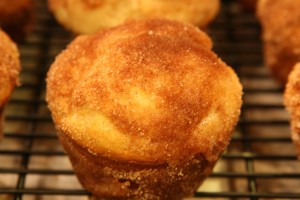 These light, melt in your mouth cinnamon breakfast treats are worth every bite for the impact on your planned calorie intake for the day. Did I say melt? Perhaps I was referring to the fat content from the two sticks of butter in these sugar coated muffins. Yes that was two sticks of butter and no the recipe is not from Paula Deen on the food network where everything starts with butter. It is actually a slightly modified version of a recipe from the Pioneer Woman website where they are called French Breakfast Puffs. We thank her for the original recipe and her on-going cooking activities. We will be sure to try some of her other creations.

Ok so back to the butter. James Beard once said “Good bread is the most fundamentally satisfying of all foods; and good bread with fresh butter, the greatest of feasts.” Is that not a wonderful quote to live by. So why not lots of butter in some muffins! Well the truth be told, the first time I made these with three sticks of butter. I somehow forgot the Crisco and used butter. Why, I will never know. The Crisco was sitting right there on the counter. I claimed it was camouflaged, but the sous chef was not buying it. Anyway that batch turned out as good as the Crisco version.

This recipe is easy to make and a great way to engage young children. They would love to help you dip these in butter and then roll them into a cinnamon sugar mixture. The aroma reminded me of growing up and putting cinnamon sugar on my buttered toast. Save the leftover sugar mixture for that.

I never would have imagined dipping a muffin in butter. Think of the options this might bring to the muffin creativity table. What surprised me is that the muffins do not get soggy. The golden brown exterior at the base stayed true to its shape and the tops did not crumble and fall apart. The coating transforms the whole appearance from basic muffin to masterpiece. 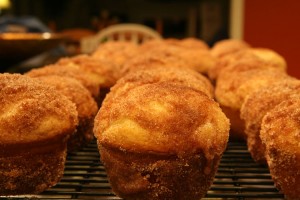 1. Preheat oven to 350 degrees. Coat a standard size 12 muffin cup pan with cooking spray, unless they are a non-stick version.

2. In a large bowl whisk the flour, baking powder, salt, and nutmeg until combined. Set aside.

3. In a large bowl or stand mixer bowl, cream together 1 cup sugar, vanilla and shortening. Add the eggs and mix again. Add flour mixture and milk alternately to creamed mixture, beating well after each addition.

5. In a bowl, melt 2 sticks of butter. In a separate bowl whisk 1 1/2 cups of sugar and the cinnamon. Dip baked muffins in butter, coating thoroughly. Shake excess of the muffin. Next coat with cinnamon-sugar mixture dipping the base first and then rolling the top in the sugar mixture.