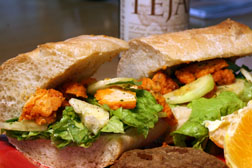 Serving fresh baguettes for our Saturday lunches on the patio is now a permanent item on our menu. Lunch could be Ploughman’s style where we are tearing off pieces of baguette and adding butter, with crisp granny smith apple slices, and a new cheese to try on the side. Baguette sandwiches are another favorite filled with fresh lettuce from the gardens (dressed with our homemade flavored vinegars), cucumbers, meat and cheese are also a refreshing break from toiling in the gardens. In our house baguettes have been bought from a store, freshly baked, but still store bought. Then I wondered what would a homemade baguette taste like and what was involved. I realized that I would first need a perforated French bread pan

to get the perfect crust.

The next step in the process was to find a recipe. There was a french bread recipe on the pan and several others I reviewed until I settled on one from the Bread

cookbook I have. It has yet to fail me and when I looked at a version in cooking illustrated it would consume my whole day. This recipe still takes about 5 hours and then cooling time for the bread which will vary by cook on how long you can keep your hands off of it.

The baguette recipe requires no special ingredients and the results were outstanding. I kept one of the french sticks until the following day to see how it would hold. Most store bought breads become hard rocks very quickly. The light chewy interior remained and the golden crust was not so hard that it would cut the inside of your mouth. The recipe that follows is my first attempt at this bread. I hope to try a sourdough version sometime in the future.

Start the process by sprinkling yeast onto 1 1/4 cups of lukewarm water in a small bowl. Leave for 5 minutes stirring to dissolve. In a large stand mixer bowl, mix the flour and the salt. When the yeast mixture is ready, make a well in the center of the flour mixture and pour the yeast mixture into it. Use a wooden spoon to draw the flour into the mixture and form a soft paste. Cover with towel and let the “sponge” rise and become frothy for about 20 minutes.

Uncover the bowl and add a dough hook to the stand mixer. Mix the dough, adding the remaining water, a tablespoon at a time, and scraping the sides as necessary. Mix until you have a soft sticky dough. Next knead the dough in the stand mixture for 7 minutes (10 minutes by hand).

Lightly grease the inside of a large glass bowl. Place the dough in the bowl and cover and allowing it to rise for 1 1/2 hours (double the size). I love the proofing setting on our wall ovens for this stage. Punch it down and recover letting it rise for 45 minutes repeating this step twice (That is 3 hours for rising total).

Divide the risen dough into two equal portions and shape into baguettes. This shaping baguettes video is a good demonstration of the process. Note that this recipe calls for the baguettes to be 12 inches in length. Place them in your baguette tray or baking sheet as demonstrated in the video. Cover them and proof them for 50 minutes. Preheat your oven to 475 F part way through this process. (Note that I used a convection bake cycle at 450 F to ensure good circulation for the crust)

We are at four hours now and it is time to cut several diagonal cuts across the top of the bread. I attempted this with my sharpest knife but found the dough to be extremely sticky. A safety edge razor or lame slashing tool would work better. Stick the bread in the oven and cook for 20-25 minutes. Cool on a wire rack.

Great bread, but the challenge is going to be getting up early enough to make the bread for lunch on Saturdays 🙂