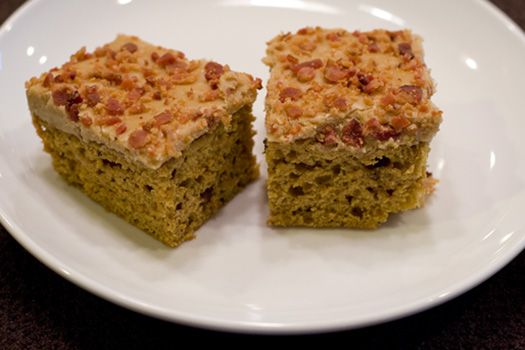 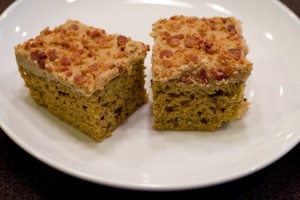 It was time for the breakfast club at work and the decision on what to make was on. Work was very busy so the selection would have to be something that was not going to take a lot of preparation and was reasonably transportable. After some discussion we decided on the following menu.

The cake snack bars listed above are from the CuisineAtHome October issue just in time for this menu. Both looked very interesting and worthy of testing out on some fellow workers to get some feedback. The bacon on top of a caramel frosted pumpkin cake was at first shocking, but then I could see the logic in the salt and sweet combination. Oh and of course the question of the day would then be “was that bacon on top of that?”, to the surprise of everyone.

Now before we provide the recipe here I do want to say that if you like food magazines you should consider CuisineAtHome. It always surprises me with ideas for food and the recipes have yet to fail me.

Next time you are required to bring a menu item to a brunch or host one yourself give these a try. The cake was moist and dense, and the icing was a deliciously smooth caramel flavor. The bits of bacon on top added a salty crunch that offset the very rich and sweet icing. It would be a great morning or early afternoon treat on Thanksgiving day to warm up the senses for some pumpkin pie later that evening.

Cook the secret ingredient “bacon” in a saute pan over medium heat until crisp. Remove onto paper towels and set aside. Reserve 2 tbsp of drippings.

Whisk together flour, baking soda, cinnamon, nutmeg, allspice and table salt for the bars in a medium bowl and set aside.

5. Spread pumpkin batter evenly into the prepared pan. Bake until center is toothpick clean from testing (about 20 minutes). Let cool completely before frosting.

While the cake is cooling combine the 2 cups of brown sugar, water, and a pinch of salt in a large sauce pan. Bring to a boil over high heat for about 5 minutes gently swirling to prevent scorching. Whisk in cream and butter pieces which will cause the mixture to bubble rapidly and keep whisking. Boil another 2 minutes.

Pour the caramel mixture into a stand mixture bowl and whip on high speed until the bowl is cool to the touch and mixture is thick (about 6-8 minutes). Scrap down the sides as needed. Once mixed add the cream cheese on cube at a time until the frosting is smooth. Frost the bars.

Finely chop the bacon and sprinkle onto the bars.

Modified from Cuisine at Home