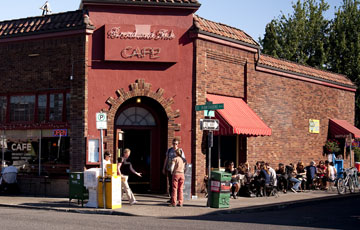 SE Hawthorne St in Portland OR

We arrived for a family visit and vacation in Portland, Oregon yesterday. The flight in provided us a splendid view of the rugged mountainous landscape covered in evergreen and cut by the mighty Columbia river. During our visit, we plan to explore the city with our family tour guide (Alison) giving us a look at the real Portland, travel to the countryside to visit vineyards and local cuisine and hike in the Columbia River Gorge while finishing the day with some more of the unique regional cuisine.

Our first expedition into the bicycle infested, grunge Nirvana community of SE Portland took us through neighborhood streets until we arrived on SE Hawthorne Blvd. This street really brings you back in time with steel rings embedded in the street curbs for horses, so are we thinking late 1800’s here? In four short blocks we found cuisine options galore and vintage stores that might not bring you back to the 1800’s but the early to mid 20th century. Any street that has a crepe shop gets five stars from me. 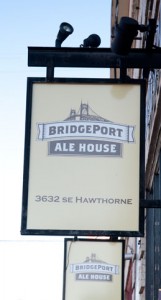 The flight left us a bit dehydrated and with the three hour time change, hunger pains began. Portland has numerous brew pubs so we decided to give them a try and we were not disappointed. We popped into the Bridgeport Ale House upon Alison’s recommendation for a pint or two of the local barley and hop infused waters, aka beer. I fully expected their to be a beer factory in the back operated by pulleys and straps powered by people on bikes, but was reminded that this is the ale house not the brewpub. We order a flight of eight beers to try some of the award winning beverages.

The first up was their Indian Pale Ale which was quenching with citrus notes and very flavorful. I find many Pale ales to have a bitter finish, but this was smooth just as they described. It is no wonder that it has won awards dating back to 1997. The other beers were also very well crafted as well but the Ropewalk Amber Ale was my choice for a full pint. We ordered a spinach artichoke dip to see if the craftsmanship of the beer was matched by the cuisine in the kitchen. The dip arrived with a toasted crust and tortilla chips. The dip was creamy in texture and is what you would find in most basic recipes for this dip. My only suggestions would be to add some pepper flakes in the blending and improve on the chips. Some baked pita might be nice.

Overall our first Portland brew pub experience gets a 4 1/2 stars for the beer and 3 stars for the food. Our next stop (and post) is the Jade Lounge for a true underground SE Portland experience.