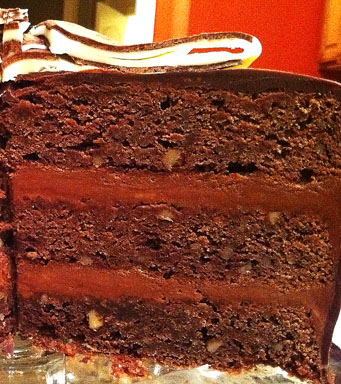 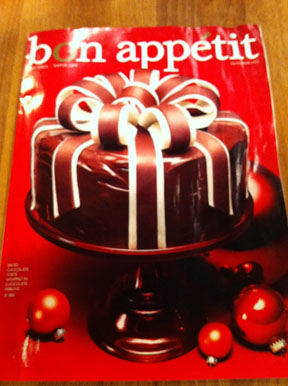 The spiced chocolate torte with ribbons cake featured on the cover of the December 2010 Bon Appetit magazine taunted me to test what I had learned this year about baking. Then Bon Appetit tweeted a challenge to make this complex cake. Deciding that this would be my final challenge for 2010, I set out to get the ingredients and accept the challenge. The recipe and instructions for this fabulous cake can be found here.

The cake is three layers and by chance I had the required 3 pans to take care of that part of the recipe. Although more involved than most cakes this is not where the cake tested me although I almost used cake flour instead of AP flour. I then realized that for a torte we wanted a heavier not lighter cake. Next was the buttercream that again was fairly straight forward and so delicious I had to fend off the locals here with my spatulas promising them scrapings from the bowl. The cake was now assembled and chilled for its chocolate coating. 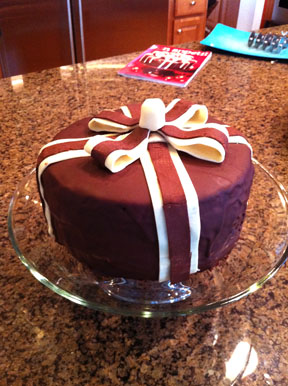 The recipe had already consumed considerable chocolate but here we were back to melting chocolate again. I rarely use a double boiler method anymore since the Advantium oven we own has a melt chocolate chip setting. This works very well and you never risk any water getting into the chocolate with this method. I highly recommend melting chocolate this way. The chocolate coating was now made and beginning to thicken up a bit. The instructions called for pouring it over the top and tilting the cake. The cold cake and liquid chocolate were a perfect match as it poured down the sides of the cake. We started in the center and then poured at the edge as we tilted the cake. We used a spatula in an attempt to smooth it out but learned that just a little more attention to the tilting and pouring would provide excellent results. We had the cake on a wire rack allowing the excess chocolate to drop down the sides.

We now had a great looking chocolate cake with a very attractive chocolate sheen. Next came the ribbons. We are probably at about 5 hours of time by now; maybe more. The ribbons required white and dark chocolates. Mistake number one was having one bar of white chocolate and thinking I could put white baking chips in. Wrong, they are not the same. The chips did not really melt. Looking at the ingredients I then saw palm oil and realized my mistake. Trust the recipe, it said good quality chocolate. Out to the store we went to get more white chocolate. More melting of both and stirring in corn syrup until incorporated.

Next was the making of the chocolate ribbons. First my challenges with the darker chocolate. I used bittersweet (60%) chocolate and had quite a bit of difficulty forming the ribbon. The chocolate was drying out and cracking. Not sure if it was the chocolate or the handling. I was very disappointed in the texture and sheen of the chocolate. I would recommend using a semi-sweet chocolate instead for the ribbons. The white chocolate by comparison was almost too soft but it worked. I used my five wheel cutter to make even ribbon cuts and then applied the dark chocolate ribbons on top. The brittle nature of the dark chocolate had many ribbons crack at the curve in the cake. At this point time was running out and I decided that 4 main ribbons and four ribbon bows on top would have to do.

After all the work it then came time to try the cake. I must say everyone who had a bite of the cake was in heaven; many were speechless. I learned a lot with this cake and will attempt to make these types of ribbons again. As for the cake, I will make it again for a very special occasion and I now have a special place in my heart for those that create these fantastic looking cakes. It is a huge amount of effort. My efforts for 2010 are complete.