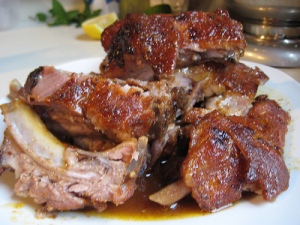 Pork ribs remind us of warm summer days and firing up the barbecue. Right now our five burner bbq grill is sitting on the patio with over two feet of snow around it. So why are we talking about ribs then. The month of January was the clean out the freezer project and a rack of ribs was sitting there waiting to be consumed. A plan had to be crafted when a few weeks ago I found a recipe while searching tags on wordpress.com that brought me to the blog Chowtown. There right before my eyes was a recipe for ribs made in a slow cooker.

I had never thought of using a slow cooker before; what an interesting concept. Then I started to think about how I slowly cook a chunk of pork shoulder in the oven. The slow cooker is just a smaller oven that is good at keeping moisture in so the idea seemed to make a lot of sense. Sure enough the concept worked and will now challenge me to create some new rib concepts in a slow cooker.

The recipe can be found here thanks to the efforts of RuneRider. The only thing I changed in the recipe was adding some more liquid for covering the ribs and increasing the cooking time. Time is probably dependent on the type of slow cooker you have and the style of ribs.

The ribs were very tender and flavorful with very little preparation. They truly are the fall of the bone type when they are done. Enjoy them with a nice side of cole slaw and some beans.