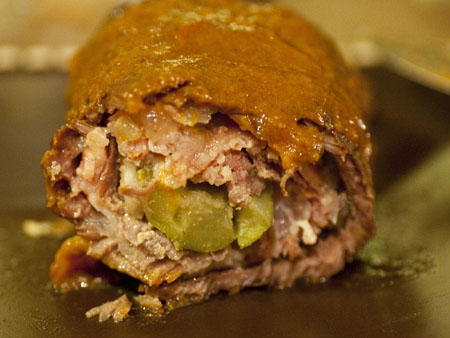 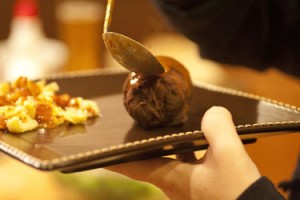 It is October and the branding around Oktoberfest makes one think of German cooking. We decided a German meal was in order and Rouladen won over bratwurst this year. This is a recipe I first tried years ago but I have modified it over the years. This was a family favorite and often I used what was in the house for ingredients. My family preferred carrots to the original parsnips and extra chopped onions instead of leeks. Occasionally we have used sweet green or red peppers instead of celery.

To round out this meal we added some spatzle, red cabbage and homemade pretzels. We need some practice with our pretzels as they looked more like pretzel buns than pretzels. If you have never had Rouladen it is worth the time to give it a try this fall. 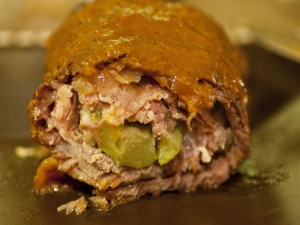 No stars for appearance but they are good.

Cut the steak into 6 rectangular pieces about 4 inches wide by 8 inches long. Spread each with 1 tsp mustard, sprinkle with 2 teaspoon of the onions, and place a slice of bacon down the centre. Lay a strip of pickle across the narrow end of each piece and roll the meat around it in jelly-roll fashion into a cylinder. Tie the rolls at each end with kitchen cord. In a heavy 10-12 inch skillet melt lard over a moderate heat until it begins to sputter.

Add the beef rolls and brown them on all sides, adjusting the heat so they colour quickly and evenly without burning, Transfer the rolls to a plate.

Pour the water in the skillet and bring to a boil, meanwhile scraping the brown particles from the bottom and sides of the pan . Add celery, leeks, parsnip and salt and return the beef rolls to the skillet. Cover, reduce heat to low and simmer for 1 hour or until meat is tender when pierced with a fork. Turn the rolls once or twice during the cooking period. Transfer the rolls to a heated platter and cover with foil to keep them warm while you make the sauce.

Strain the cooking liquid left in the skillet through a fine sieve or process with an immersion blender. Measure the liquid, return it to the skillet and boil briskly until reduced to 2 cups. Remove from heat. Melt the butter in a small saucepan over a moderate heat and, when the foam subsides, sprinkle in the flour to create a roux. Lower the heat and cook stirring constantly until the flour brown to golden. Be careful not to let it burn. Gradually add the reduced liquid, tomato paste and herbs beating vigorously with a whisk until the sauce is smooth and thick. Taste for seasoning and return the sauce and the Rouladen to the skillet. Simmer over low heat only long enough to heat the rolls through.

Serve the rolls on a heated platter and pour the sauce over them. Rouladen are often accompanied by red cabbage, and dumplings or boiled potatoes.

Some stores carry thin sandwich steaks that work well with this recipe to accelerate the preparation.

Modified from Time-Life Foods of the world series