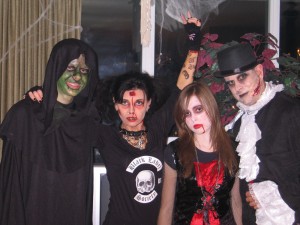 MENU
First Chance
Salad of Graveyard-Grown Herbs, Pear, Congealed Pomegranate Flesh, Candied Pecans, Mouldy Cheese with Fig and Orange Secretions
Second Chance
Cauldron Boiled Pumpkin Medaglione with Creamy Roasted Blood Red Pepper Sauce
Last Chance
Corpse of Cornish Game Hen stuffed with Wild Rice and Apricots
The End
Death by Chocolate Cake with Lashings of Caramel Sauce
Beverages
Crystal Head Vodka Martinis with Gummy Worm Garnishes Monster Energy Drinks Nasty Habit IPA, Rigor Mortis Abt Jekel Cabernet Sauvignon 2007
Story and Recipes
With a grim reaper, a vampire, Jack the Ripper and the devil on their way over, expectations are high for a very scary dinner. And if you’ve watched me cook in the past, you’ll know just how scary that can be. I’m multitasking between slashing my neck and wrists, slicing up my leg and applying tattoos to my arms, chest and neck and oh yeah, prepping. Where to start? The bullet hole in my head is looking like a favourable option. 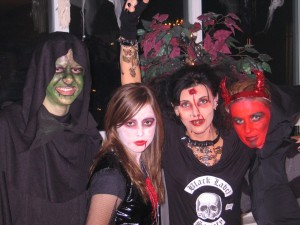 Since it will take the most time to prepare and cook, I start with the hens.  First I clean and prepare them for stuffing.  I melt the butter in a medium sized saucepan, add the onion and garlic and cook until turning soft but not yet brown.  I then add the wild rice and 1 cup of the chicken broth, 1 cup of water, cook for about 30 minutes (or until al dente and the liquid has been absorbed) and then stir in the apricots.  In another 5 minutes or so when the rice is starting to fluff, I season to taste and then stuff the Cornish game hens with the mixture, being sure not to over stuff.  Each is then tied with a piece or 2 of string.  With the other 2 cups of chicken stock nicely boiling in the cauldron, I mix up the honey, cumin, oregano, coriander and saffron in a small bowl and set it aside. I then wash the mini red potatoes, halve them and coat with olive oil and fresh rosemary and thyme and plenty of salt and pepper and set them in a roasting tin. Off to decay my wounds…
Corpse of Cornish Game Hen stuffed with Wild Rice and Apricots
Ingredient List:
¼ cup butter
½ onion
1 clove mined garlic
1/3 cup dried apricots
½ cup uncooked wild rice
3 cups chicken broth
2 Cornish Game Hens
3 tbsp runny honey
1 tsp cumin
1 tsp oregano
1/2 tsp ground coriander
2 pinches saffron
20 mini red potatoes
Olive oil
Fresh rosemary & thyme
By the way, the key to making liquid latex wounds look authentic is to pick holes in the larger ones and pull up the dried latex to create a nice rotted texture. Apply darkest makeup to the most decayed parts, surround with greenish yellow for a bruised affect and apply theatre blood last. Use decent brushes and clean them as you change colour. Don’t forget lots of baby powder over top to make it set or you’ll look like a drippy smudged mess by the end of a long dead night. Salad of Graveyard-Grown Herbs, Pear, Congealed Pomegranate Flesh, Candied Pecans,Mouldy Cheese with Fig and Orange Secretions
Ingredient Lists:
5 cups of mixed greens and herbs
20 butter toasted pecans
1 Anjou pear
½ cup crumbled Blue Cheese
½ cup pomegranate seeds
Stonewall Kitchens Balsamic Fig Dressing
Orange juice
Back to the kitchen…The birds are poached in the broth for 1 minute and the potatoes go in the oven. I’ll now assemble the salads well in advance of the guests arriving. First the greens, then the pear (yes pear, Jack, you can’t have everything you want) The congealed pomegranate flesh is actually pomegranate seeds and the moldy cheese is Danish Blue. The secretions are a dressing of 2 parts balsamic fig dressing and 1 part orange juice. Boots, studded dog collar (fitted loosely so as not to interfere with the neck wound) and hair are next. Thought about wearing a wig but my own damaged locks are far more frightening. I notice my neck gash is coming loose. Nothing a little spirit gum can’t tack back into place.
I’m off to the dollar store to find black placemats… Can’t wait til I get back to pour myself a Cranium (Cranberry Juice with Crystal Head Vodka).  For those that do not know, Crystal Head Vodka is Dan Akroyd’s new vodka that we had to buy at duty free since the LCBO (Ontario’s Government owned Liquor Store) thinks that it sends a bad message to all those underage drinkers who might want to top themselves after looking at the bottle. 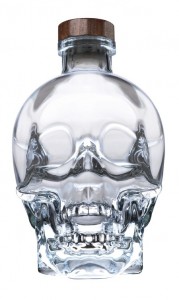 Back now and lucked out, even found some insect confetti. I set the table and sprinkling the ants and cockroaches over it to complete the scene for the feast. 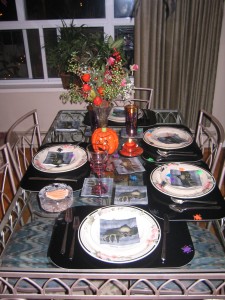 I brush the hens with the honey mixture and pour the remains (get it? “remains”) in the bottom of the baking pan. The hens are placed on top and baked in the preheated oven at 350 degrees for about 45 minutes unless you want them well cremated, like I do ~ Then you leave them in until your guests arrive (no matter what time they decide to show up).
Ok, a couple black eyes, a few piercings, some candles and I’m good to go.  Oh yeah, have to rehang some of the spider webs that the Beast (Angus, my cat) tore down in the night.  Speaking of Angus, I should run around with a hoover since the guests are sure to be wearing black and the sofa is probably covered in long white cat hair. Opeth, Meatloaf, Danzig and Type O Negative will keep me company until they arrive. I wonder how burnt they want the corpse. Tick tock, tick tock…
When everyone arrives, we admire the effort each has put into their costume, touch up make-up, fix fingernails and secure prosthetics before having a Darcellator (martini made with 1 oz vodka, 1 oz, Alize Red Passion Cognac Liqueur, 1 oz Monster Energy Drink , 1 oz Tonic, splash of orange juice and a gummy worm to garnish). Substitute the booze for Cranberry Juice for a mocktail version. I must baste the bird. 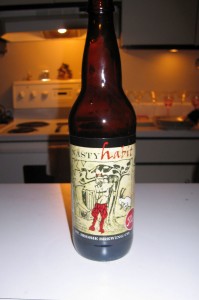 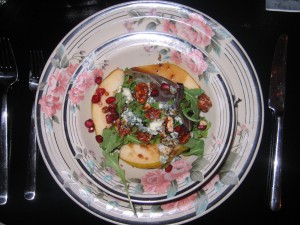 As the salads are devoured by my clearly ravenous guests (I think we are eating later than the vampire and the reaper are used to), the pasta is cooking on the stove.
Cauldron Boiled Pumpkin Medaglione with Creamy Roasted Blood Red Pepper Sauce
Ingredient Lists:
25 Pumpkin Medaglione Creamy Roasted Red Pepper Sauce
5 tbsp pumpkin pie filling
Parmesan Cheese
Fresh Rosemary & Thyme to garnish
The fresh pumpkin medaglione and roasted red pepper sauce were bought at the Pasta Pantry on Yonge St., north of Davisville in Toronto. Carlo and Melva make the best homemade pastas and sauces in the neighbourhood so why compete?  I mixed the pumpkin pie filling into the pasta sauce in order to get a hint of pumpkin spice into the dish.  In hindsight, I would have added a tiny bit of cinnamon, ginger, nutmeg and allspice into the mix as well for a more pronounced flavour.  5 medaglione each are topped with sauce, a dusting of grated parmesan cheese and a few leaves of rosemary and thyme. I must not forget to baste the bird. 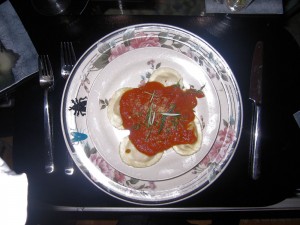 The wine pairing I’ve chosen is Jekel 2007, a Californian Cabernet Sauvignon.  It is described as fruitforward and balanced.  I thought the blackberries and blueberries were nicely offset by a bit of oak and spice. Although I’d normally go for a white wine, I felt that the pasta and the many flavours in the roasted hen could stand up to a red and they did.  Delicious. 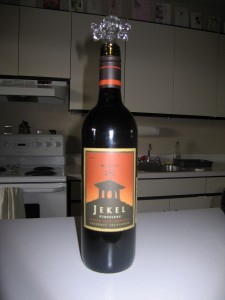 Following the pasta dish, each guest is served ½ a Cornish Game hen (I know, picture shows a whole hen each but we’re not that greedy) surrounded by well roasted potatoes.  If there was any juice left on the bottom of the pan, it would be poured over both.  However, it is Darcified (see picture) hence no juice.  It was delicious nevertheless.  That’s what the guests said and you would too.  Nobody likes an angry, insulted zombie. 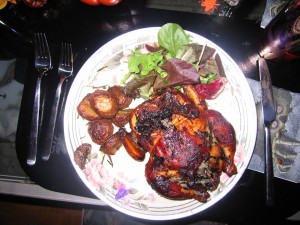 The cake was bought from Dufflet here in Toronto http://www.dufflet.com/home.asp.

The one pictured is actually called Carmelita but that didn’t sound festive. Actually Carmelita doesn’t sound like anything except the name of the waitress down at Tia Juana’s Taco Grill and so it became Death by Chocolate with Lashings of Caramel.  I served it with Timothy’s Midnight Magic Coffee or Rigor Mortis, intense malty, sweet brown ale inspired by the beer brewed by Belgian Trappist monks. 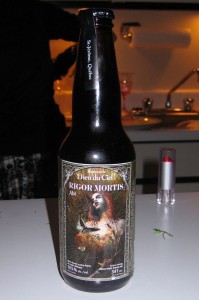 So yes, I took a few shortcuts but the costume and the décor were taking up enough time. I’m no candidate for Hell’s Kitchen but it wasn’t the Kitchen Nightmare that it could have been. Everyone is satisfied and in good spirits. The kitchen looks like an exorcism. My work here is done.
Happy Hallowe’en!!
Tags: Chicken, cocktail, Cooking, Food, Recipes