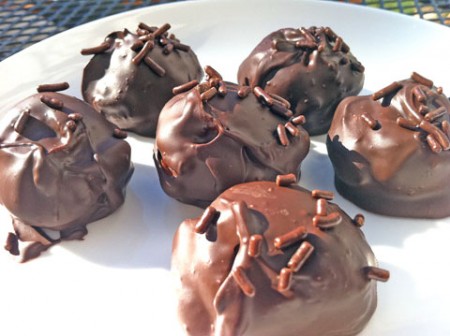 First let me qualify that my blogs for will be a little short due to a knife accident that is making typing a little more challenging. That said the battle for the liquor infused balls is in full swing. I think my brother might be makes some as well. Our current favorite has been a rum ball recipe from the Martha Stewart’s Cookies

book. I can’t keep these balls in stock at our house often having to hide some to last until Christmas Day. The new challenger is a recipe Kentucky Bourbon Balls submitted to the Food 52 website.

There were a couple of reasons the bourbon balls were selected as the contender this year. First, the recipe included a quality Kentucky bourbon, Makers Mark. Second, I have not made a rum ball coated in chocolate and decided it was time to make something like a chocolate you get in a box. Third, the picture on the site made them look too delicious to not try.

The recipe was pretty straight forward with simple ingredients. The part I found most challenging was rolling the bourbon centers. The mixture even chilled could warm up fast and once when we pushed the pecan halves on the sides they were not as round as before. After a while I just stopped worrying about that. The chocolate process was a first for me. I simple used a fork and it worked for better or worse. I placed them on a silicon mat debating back and forth if they should just be place on a wire grate. It worked with my method but was not as pretty as I would have liked. (of course that could be because I forgot to put the butter in the chocolate!)

The flavor of these balls was outstanding with the bourbon centers bringing the strong rich liquor flavor and the chocolate coating providing a rich decadent finish. The pecans were not even that noticeable which made my “no nuts please” wife happy. I am not sure I would change anything in the recipe aside from my technique for dipping the balls. The chocolate could be modified to add some wax to improve the storage of the balls. When I make these next year I think I will drizzle another layer of white chocolate colored in red to give it that Makers Mark seal on top.

Our original rum balls remain on the list but these join them. They are different in that the rum balls are not coated in chocolate and have a cake like center. However they taste rich and just as decadent. We will post that recipe after the holidays or look them up in the book. For now, here is the Kentucky Bourbon balls that have won a place at our table.

Cream butter, powdered sugar and Makers Mark together in a standing mixer on medium speed. Let mixture stand in refrigerator for 3 hours, or until hardened.
Once cooled, roll into small 1 inch balls and press pecan halves on either side. (We used a small cookie scoop to make the balls) Set aside on wax paper.

Melt the chocolate and butter together over double boiler at low temperature. Dip the bourbon balls centers into the melted chocolate one at a time. You want your bourbon ball to be completely covered in the chocolate. Set ball back on wax paper or DeMarle 2409 Silpat silicone baking mat

until chocolate is firm.

Store in refrigerator. Can be made in advance.