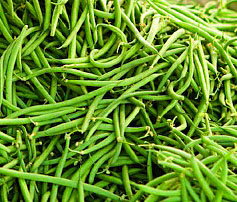 We had some excellent green beans this season from our Organic Maxibel Haricot Vert Bean seeds courtesy of the folks at High Mowing Seeds. It launched a new appreciation for green beans in my meals and an excuse to try to dress them up a bit.

Today we decided that a version with some kick would be in order so we chose one our favorite heat sources, Chipotle peppers in adobe sauce to start the process. We have had some success in the past with oranges and limes with these peppers so an orange was added to the recipe. Some crunch from toasted pecans and a dressing for the beans came together. This is a quick and easy way to add some new flavor to your beans. Give it some kick, you won’t regret it.

Coarsely chop the pecans and toast them in an oven. Set aside. Prep and trim green beans as required. Fill a large sauce pan with water and bring to a simmering bowl over high heat.

Place the green beans in the boiling water and cook 5 minutes or more until they are firm but tender. Drain and place beans in large bowl. Pour Chipotle mixture and nuts over beans and toss until coated. Serve warm spooning some of the dressing on the bean on the plate.