A Year In Review (recipes from around the world) 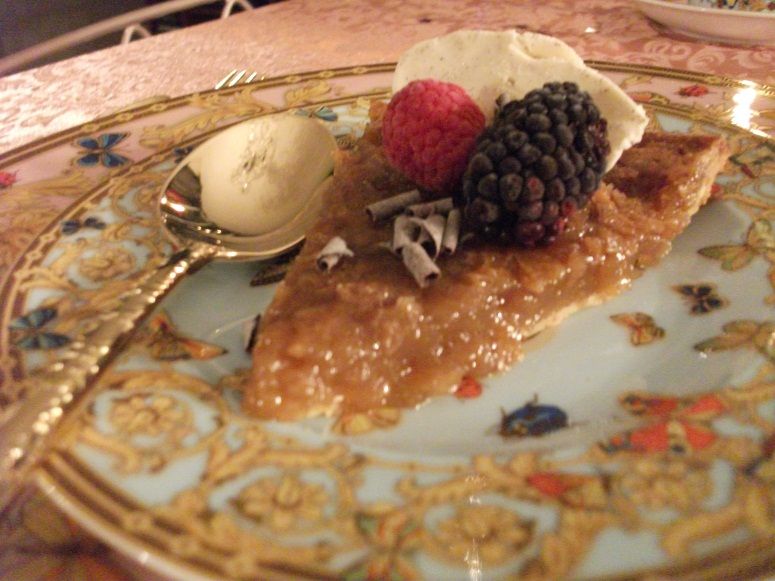 Reflecting on an action-packed year of fun and adventure, we tried to come up with a theme for an upcoming anniversary.  Neither of us shy away from mixing cuisines (hey just allow enough time between courses for your stomach to forget they don’t mix!) so we decided to cook a dish from each of the 4 places we had vacationed over the past year.  He would be responsible for 2 and so would I.  He got to choose what courses he wanted but I got first pick on the destinations (Relationships are all about compromise, right????).  Here is the menu we ended up with (recipes to follow):

Her Appetiser from Italy: Swordfish Involtini with Couscous

His Soup from Boston: Shrimp and Corn Chowder 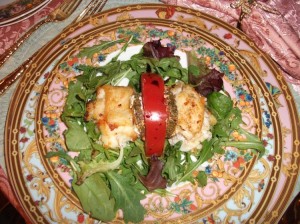 So you’re thinking “she picks Italy and ignores all the wonderful pastas and anti-pastas and cooks something with an Arab or Israeli tradition”?  Well, not entirely true. Trapani is the capital of swordfish in the Mediterranean and Sicily incorporated couscous into its cooking long ago. And unlike my dining companion, I love fish (remember what I said about compromise). This dish was light and flavourful and whetted our appetites for 3 more courses. Maybe, just maybe, pasta was avoided to leave room for those 3 courses. It is best served with a full bodied white wine, rich in citrus, tartar and dry fruits or even better, Champagne or rose.  We chose Lanson Rose Champagne. Yum! 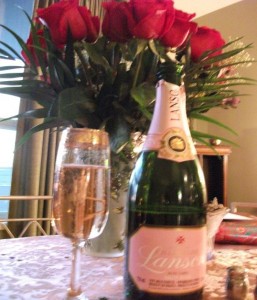 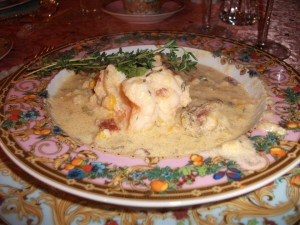 Boston is renowned for its clam chowder.  The only problem with clam chowder is, well…clams. Btw, don’t google “disgusting clams” you’ll be really disgusted! Anyway, this blog is not meant to make you lose your appetite – quite the opposite. I knew the male portion of this menu would be full of rich, buttery, creamy goodness and I wasn’t disappointed. It had plenty of meaty, lean seafood, including a giant prawn on each serving and the broth was a hearty mix of potato and bacon and corn and comfort and love. (Shuttup, it was for an anniversary, remember). 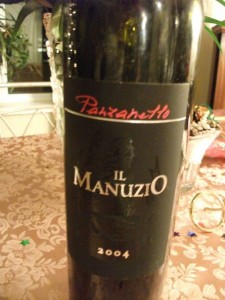 After this course, we switched to a red wine that was brought back to Canada from the Tuscan winery it was made inhttp://www.panzanello.it/en/agriturismo/.  Il Manuzio Panzanello 2004 is a blend of red grapes called “Super Tuscan” meaning that they are of a certain quality and come from at least 85% regional grapes. We know where the “super” really comes from. 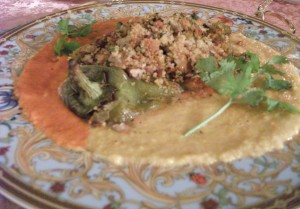 Do not let this picture deceive you.  This was the star of the show! The stuffed pepper is not drowning.  It is basking, doing a back float; delighted that it is suspended in a sea of deliciousness. The chicken that you cannot see is not hiding.  It is being protected by a loving coat of cheese, cornbread crumbs and pecans, sheathed in a drapery of cilantro after being fortified by mole. What the heck is mole, you ask? Pronounced mo-lay (rhymes with Arriba! Arriba! Andale!) in this context it not a small cylindrical mammal adapted to a subterranean lifestyle nor a unit of measurement used in chemistry.  There is a lot of history surrounding this Mexican sauce and much controversy about its origin.  The modern day consensus is that it has at least 20 ingredients, always including chillies and usually chocolate (Buy yours from a Mexican specialty grocery if you have a life). Yup, chilli and chocolate.  You can’t really go wrong. This dish truly confused the palate with a blend of savoury, sweet, nutty, spicy and creamy along with the earthiness of the coriander. You gotta try this one! 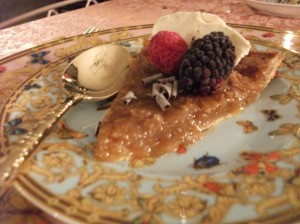 At this point I am feeling bad that there has been no red meat and the BF is a carnivore.  I thought for sure we were getting elk cake.  But no! This pie is sure to rot the teeth off anyone who likes pecan pie as much as I do.  What could be more Ontarian than maple syrup, condensed to melt-in-your mouth hyperglycemia on a spoon.  This pie was gorgeous in every way.  Garnished with blackberry and raspberry and the slightest bit of ice cream, it was served with its perfect opposite – Woodford Reserve Bourbon. (Maybe we’ll go to Kentucky next year?)

Swordfish Involtini with Couscous (from the Valentino Cookbook by Piero Selvaggio)

Salt and pepper to taste

In a small saucepan, bring ¾ cup of salted water to a boil.  Add the couscous and remove from heat.  Let sit for 5-7 minutes until all the water has been absorbed.  In a skillet over medium heat, sauté half the garlic in half the butter and 1 tbsp of olive oil.  When the garlic is golden in colour, add the prawns and vegetables.  Add the wine and reduce.  Stir in couscous and season with salt and pepper.

Lay the swordfish slices on a clean surface, divide stuffing evenly on top of them and roll them up.  Place rolls in a shallow roasting pan, add ½ tablespoon of olive oil and the remaining garlic and butter and season with salt and pepper.  Put in the oven for 7-10 minutes until swordfish is lightly coloured.  On each plate, place 2 rolls on a bed of greens with a piece of tomato and 2 pieces of mozzarella between them.

4 slices of bacon, stacked and diced

Melt butter with 1 tbsp of bacon fat over medium heat until hot. Add carrots, onion, and celery, and cook until vegetables are tender, about 15 minutes, stirring often.

After 40 mins, stir in cream and then add sliced shrimp and cook 5 minutes longer or until shrimp turn opaque throughout.

To serve, spoon chowder into bowls; Sprinkle with fresh thyme.

Shred the roasted chicken and mix in the mole.  Let sit for at least 1 hour.

Coat a medium skillet with vegetable spray and sauté garlic and shallots over medium heat until softened.  Add chicken broth, goat cheese and cream cheese and remove from heat.  Stir to combine the cheeses.  Season with salt and pepper.  Fold cheese mix into the chicken.

Using scissors make a slit on the side of each chilli. Remove seeds and veins carefully.  Stuff each chilli with the chicken and cheese mixture.  Spray a pie pan with vegetable spray and place chillies in the dish.

Preheat oven to 375 degrees.  Combine cornbread crumbs with pecans and minced cilantro. Melt the butter in the chicken broth.

Top each chilli with equal amounts of cornbread crumbs.  Moisten the crumbs with the butter and chicken broth.  Cover the chillies with foil and bake at least 12-15 minutes or until heated through and crumbs are browned.

To serve, pool each plate with yellow pepper sauce on one half and red pepper sauce on the other. Serve one chilli per person. Garnish with fresh cilantro sprigs and baked tortilla strips.

Cut peppers into small pieces and blend in a blender jar.  Heat garlic and shallot until softened.  Add white wine and lemon juice.  Add to the blender jar and blend until smooth.  Add chicken broth, cornstarch and cream cheese and blend on high.  Pour the blended mixture back into the saucepan and heat over medium heat, stirring constantly until thickened.  Season with salt and pepper.

The instructions for these sauces are the same: Cut peppers into small pieces and blend in a blender jar.  Heat garlic and shallot until softened.  Add white wine and lemon juice.  Add to the blender jar and blend until smooth.  Add chicken broth, cornstarch and cream cheese, tomato paste (red pepper sauce only) and blend on high.  Pour the blended mixture back into the saucepan and heat over medium heat, stirring constantly until thickened.  Season with salt and pepper.  These sauces can be made in advance.

Store-bought pie dough, fitted into a standard pie or tart pan and baked for 15 minutes at 375F

Preheat the oven to 350F. Gently whisk together 1 sugar and 1/4 cup all-purpose flour until the mixture is smooth.  The sugar-flour mixture is ready for the wet ingredients when it is smooth, with only a few, small sugar lumps. Once the flour sugar mixture is smooth, add the maple syrup and the heavy cream. Whisk the mixture together until it is completely smooth. The filling will be a watery consistency. Garnish with blackberries and raspberries, vanilla bean Haaen Dazs ice cream and a few dark chocolate shavings.