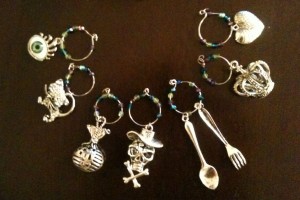 Planning for this Halloween themed dinner party was a riot.  I thought that coordinating 7 people to wear a different costume, each representing one of the deadly sins would be tough.  The fact that it was not is a testimony to how fabulously enthusiastic the group was that assembled this past All Saint’s Day. The idea was to have each element of the meal correspond to one of the Deadly Sins.  With a playlist of 77 songs that contained the title words “greed, money, price, sleep, lazy, tired, fat, eat, pig, anger, kill, war, jealous, pride, vain, lust or sex” we were ready to let out our inner sinner.  And the handmade wine charms (almost) ensured that we did not lose track of our glass. 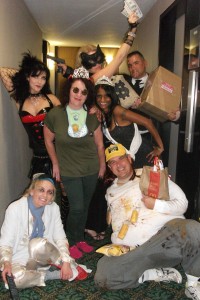 (Recipes found in the Recipe Section of the Site)

Legendary Lust Inducer – This cocktail is an indulgent combination of aphrodisiacs.  Inspiration for it came from looking at a long list of foods reputed for their seduction enhancing powers, picking a handful with culinary appeal and spending an afternoon experimenting.  With almond, banana, honey, basil, cinnamon, vanilla and chocolate, it was a sweet kick-off. 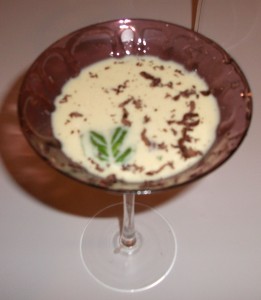 Greedy Beginnings– With so many courses to get through, one of them had to be small…and so tasty that it left guests greedy for MORE.  It was a ‘mission accomplished’ when Detective Mills asked for seconds of the Sweet Potato and Lemongrass Soup.  A velvety rich autumn potage, this amuse bouche was served in a shot glass and carefully garnished with a roasted peanut and herb pesto.    The recipe was initially published in the May 2005 edition of “O”, the Oprah Magazine and that night it was prepared by Ms. Pride National Post. Thanks! It was paired with a full-bodied Chablis from Burgundy, La Chablisienne Vieilles Vignes, 2009. 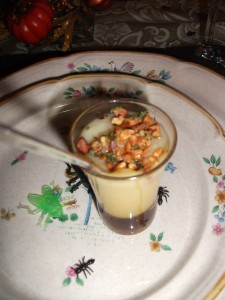 Greens with Envy – Guests were asked in advance to choose between 2 very different salads.  The Mexican Salad with a lime guacamole dressing was served with grated cheddar and Monterey Jack cheeses and tortilla strips. The Asian Salad was dressed in sesame soy vinaigrette with cashews and wonton strips.  Naturally guests got whichever salad they did NOT want so they could drool at the plate next to them.  I think envy got the best of them however because some sharing was going on. Everyone agreed the Asian was the hands-down best!

We wanted a full bodied and firm Rioja to pair with the Mexican salad and a light, crisp Pinot Grigio to go with the Asian.  We chose Coto de Imaz, 2005, Rioja, Spain and Santa Margherita, 2012, Alto Adige/Trentino, Italy.

The Vanity Plate – This dish had to be so good looking that it brimmed with pride! So why not serve it on a mirror? Marinated Jumbo Prawns, Wrapped in Prosciutto with a rosemary sprig and a sliver of mango proved to be a deadly combination.  The recipe was adapted from one that used bacon. Although shrimp and bacon have a natural affinity for each other, they need different cooking times.  By using prosciutto instead of bacon, which is thinner, that problem is eliminated. I have to say, this course did me proud and the wine was nothing to be ashamed of either.  Elk Cove Pinot Noir, 2011 Oregon is full bodied and smooth with plenty of rich peppery blackberry and raspberry character with impeccable balance. Favorite wine of the evening! 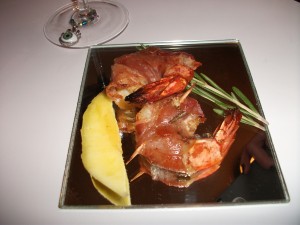 The wrath main dish is actually Angry Chicken, a recipe our gluttonous hick discovered in Morimoto’s cookbook purchased at his restaurant in Philadelphia. (See review here). With 1 ½ cups of Frank’s Hot Sauce and whole broiled chilies, it was screaming hot. The yogurt and spices gave it an incredible tang but it was clearly not for the faint of heart as evidenced by the consumption of our pallet-taming side dish. Yup, the sloth side was actually Kraft Dinner (boxed macaroni and cheese for you Brits and Americans) served in the pot avec (that means “with” for you Brits and Americans) wooden spoon. To further cool down our raging mouths it was paired with a household classic Cloudy Bay Sauvignon Blanc, 2008 Marlborough, New Zealand.  This wine is bursting with the classic fruitiness of gooseberry, melon and lime. 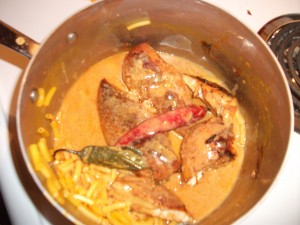 Not being much of a baker, it was time for a short cut. A variety of gooey, fattening, over-indulgent cakes, pastries, tarts and meringues were purchased from Mercato‘s in Bolton Ontario.  Thanks Big Guy! From the obnoxiously rich to the sexy and dainty, there was something for everyone.   After a meal rife with debauchery and turpitude it was time for absolution so we brought out the shot glasses one more time for Blanton’s Single Barrel Special Reserve Kentucky Straight Bourbon. That’s when the party got really wicked! 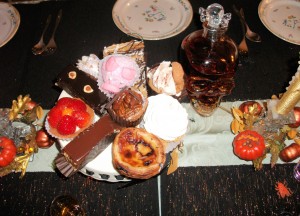 I learned a lot having this dinner party:

1. Do not be afraid to create cocktails and salad dressings

2. Kraft Dinner is even better when you can afford other stuff

3.  Making wine charms is like beading.  Beading requires good eye-sight, manual dexterity and patience, none of which I possess. No, I’m not taking orders. 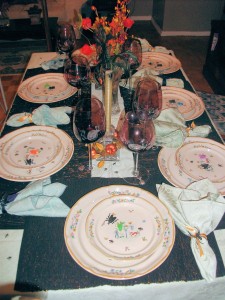