We were informed today that Kellogg’s has discontinued their blueberry Special K cereal. This had become evident by the empty space in the Special K section. Today we hit a lottery and found four boxes. 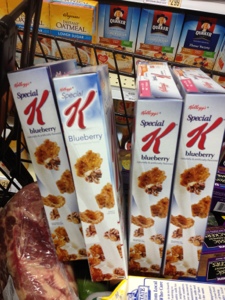 So that will hold us a bit longer until we find a substitute. It reminds me of when McCormick stopped selling It’s a Dilly spice blend. Another randomly discontinued product. It is also too bad they don’t bring these products back in a limited time fashion like McDonald’s McRib.

Some angry consumers are telling Kellogg’s how they feel at their website.

A partial solution to this dilemma can be solved by mixing your own.  Since the core ingredients are the same, take an original version of Special K cereal and add your own dried blueberries.  We have found these at costco and traders joes but they are not cheap.  That could be why they were discontinued.  The NY daily news wrote this article on blueberry fakes and the cost of blueberries.

UPDATE 06/18/2014: A replacement for Kellogg’s Special K Blueberry Cereal that is worth trying is the Kashi Organic Corn Flakes, Indigo Morning Cereal that we recently found at Costco by chance. We have not been generally fond of Kashi as mentioned above but this version has caught our attention.