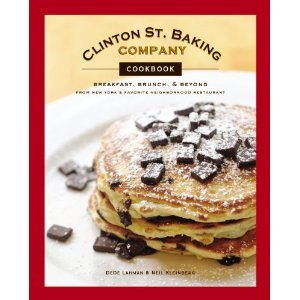 was on my wish list and not one but two arrived under the tree this year. A week off from work for the holidays allowed me some time to review this book and create a couple of the breakfast items they serve at their popular brunch in New York.

The book itself is well written with excellent pictures to go with almost 90% of the recipes. They deserve high marks for that as pictures always draw me to a cookbook whereas plain text is just that “plain”. The pictures are often full page and amply portray the simple creativity of each recipe. I originally put this on my list because of its favorable reviews and for a look at how a bakery turned into a restaurant found success. This husband and wife team combined their strengths and created an enterprising effort without a lot of flair. Known for their baked goods they expanded into lunch and sides. But what can be exciting about pancakes, muffins, biscuits and sandwiches? This is where Neil Kleinberg raises the bar and gives us his best twist on simple and soul-comforting classic recipes.

The book has ten sections ranging from biscuits to pancakes to fried chicken and, of course, some desserts. Each section has a brief introduction that often includes tips and notes, which one rarely sees in cookbooks today. These tips help one achieve optimal recipe results.

Our first test recipe were the buttermilk biscuits. I am not a big fan of biscuits but I have always wanted to make better biscuits from scratch. I have often read that, in the South, part of the trick to great biscuits was to use White Lilly soft flour made in Tennessee, which is mentioned in the book. However, I was surprised that the actual recipe required regular all purpose flour. Upon contacting Chef Kleinberg he responded that he had originally used the Lilly soft flour until it had become difficult to obtain and that the all-purpose flour was working fine with his recipe. We made the biscuits with a lower protein flour which produced great biscuits from his ingredients. We will try regular AP flour next time. We really appreciated one of the tips regarding biscuits – do not twist the cutter. That had always been my natural tendency and until this book I did not realize that it could affect the rise.

Next up on our trials were the pancakes that have been referred to as the best in New York. His trick here is incorporating beaten egg whites into the batter to lighten the pancakes. These were probably some of the best pancakes we have ever made. They do require more work than most recipes but the effort is clearly worth it for special occasions. We did not try the various toppings in the book because we wanted to try these straight up with the maple butter recipe. The maple butter was amazing! It will be the only way we’ll serve pancakes in the future.

We plan to try the french toast, buttermilk streusel and fried chicken next, but our adventures in this book will not end there. We would recommend this book for anyone interested in sprucing up their breakfast, brunch or lunch. All the recipes are approachable and don’t require spending a fortune on special ingredients. This is a book worth adding to your cookbook collection.

Five stars for design, ease of use, and quality recipes for those wanting to revisit some classics.